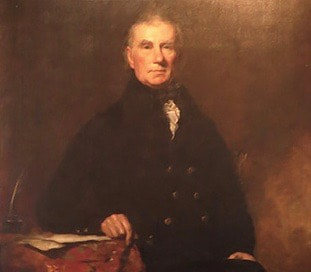 Sir James Grant of Grant.  Baronet (1738 - 1811)
Affectionately known as “the Good Sir James,” was well-educated, well-travelled and certainly the most capable chief of his long line. He was a dedicated public servant and an ardent improver of his vast estates. He was the founder of Grantown and at various times served as a Member of Parliament, Cashier of Excise for Scotland, Lord Lieutenant, and Sheriff of Inverness-shire. In the last decade of the 18th century, Sir James raised and served as Colonel of two regiments – the 1st Strathspey Fencibles and the 97th Inverness-shire Highlanders.
During much of his tenure as Chief of Grant, the highlands were devastated by periods of famine and epidemic. The country was continuously pummelled with all manner of inclement weather – drought, floods and unrelenting snowstorms. Crops were laid waste and starvation was rampant. Sir James repeatedly dipped into his own coffers to purchase grain for his starving tenants and clansmen. In most cases, he overlooked unpaid rents and searched for ways to provide employment for his clan. It was also during this time that Sir James’ personal debts continued to mount. His massive financial burdens were brought about by his own tenants’ inability to pay their rents. He also had to deal with the tragic personal loss of children, the mental illness of his eldest son and heir, Lewis Alexander, the eventual loss of his wife, and finally his own declining health. Sir James Grant of Grant, Baronet, “the good Sir James,” died at Castle Grant in 1811.
Back to the family​