​This was our 2nd year of putting on a Christmas Arts and Crafts Fair and it was even more successful than 2019. We had a tie-in with "Grantown Does Christmas", which brought lots of people to town on the weekend of 5-6 December.  Many of these folks also visited the museum to check out the crafts on offer - lots of gifts were purchased raising funds for the museum and helping local artists. Thanks to everyone who participated and helped run the event. See you again in 2021! 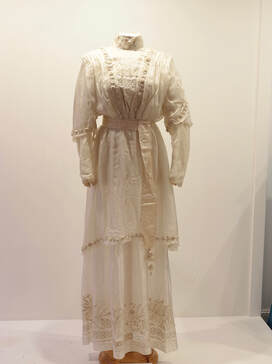 We have been keeping busy during lockdown, even though we have been unable to open. We've been working on digitising our collection (this is an ongoing project that will take some time). You can view some objects and photos via our new website -
grantownmuseumcollection.co.uk

We have also started using a new online cataloguing and publishing website where eventually all our collection will be available to view online. We have many more objects in our collection that we would ever be able to show, so eventually you will be able to see all that we have amassed. We only started this process a few weeks ago, so have about 100 objects photographed and uploaded so far, but we are adding to it all the time. It can be viewed here -
ehive.com

It's not just Grantown Museum on this website, you can also browse objects from other museums around the world. 15 February 2020
"Overlander"
Another packed house at the museum for the author Alan Brown, who visited the museum to give a talk about his book "Overlander", covering his coast to coast journey on his mongrel mountain bike. Marjorie (The Bookmark) introduced the author and then handed over to Emma Holgate (mountain biker - Glenmore Lodge) who chatted to Alan about his experience on a less than perfect bike traversing the Cairngorms mountains. Alan described his stay in various bothies along the way - he did not even bring a book on his journey, so he could send his time looking out at the landscape (and inward), and not down..... (also, books are heavy!). When his journey was over (at Findhorn) he found it difficult (and sad) to transition back to "normal" life, after spending time alone, away from modern life and all that it entails.
At the end there was a Q & A with the audience, and then an opportunity to buy a signed copy of the book. Aleta Shaw explains the infusion process to a packed house
9 January 2020
Caorunn Gin - Talk and Tasting
​The museum was packed for a deconstructed nosing, talk and tasting by Aleta Shaw from Balmenach Distillery. Aleta explained the distilling and infusion process and brought along a sample of the locally foraged, hand picked botanicals that the distillery use in their process - the audience members were invited to smell the botanicals that Aleta had brought, including heather, rowan berry and apple. Apparently, the workers at the distillery are sent out to forage on the moor when they have nothing else to do! Then they got down to the serious business of tasting the gin and charting the strength and mix of flavours. 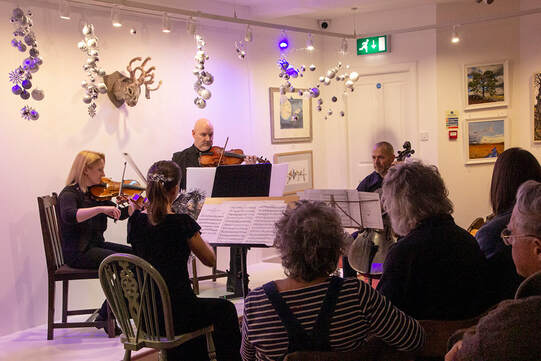 Braeriach Quartet
Winter Concert
14 December 2019
Members enjoyed a thrilling concert last Saturday - firstly the newly formed "Braeriach Quartet" (Grantown's only string quartet) entertained everyone with a selection of classical, pop and Christmas tunes. Then after a short break for refreshments, Paul Anderson and his wife, Shona Donaldson, delivered an amazing set of traditional fiddle playing and singing. All the performers agreed to come and play for free as this was a fundraising event for the museum. Members were very generous and dug deep to fill the donation boxes...and also did a bit of last minute Christmas shopping. Dan thanked everyone involved for contributing to the evening  and everyone went home thoroughly impressed by the depth of talent we have on our doorstep! 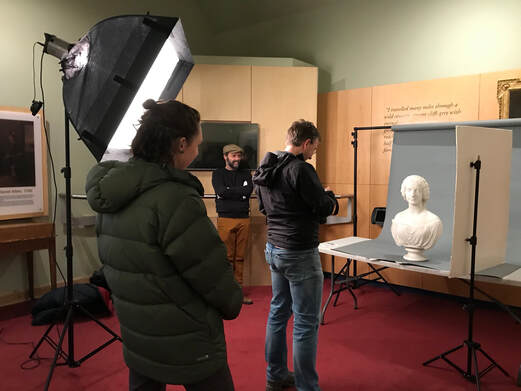 The museum manager (Dan Cottam – centre) chatting with Carsten Flieger (the photographer) and Sophia Sheppard from Art UK.
Lady Caroline to be on Art UK
Art UK visited Grantown Museum this week to photograph the marble bust of Lady Caroline, Countess of Seafield. This will appear on their website very soon.
Art UK is the online home for every public art collection in the UK (artuk.org), as featured on BBC4’s “Britain’s Lost Masterpieces”. (We love this show! The art detectives track down previously unknown paintings by some of the world's great artists). Seonaid McLaren introducing the musical duo, Emma & Robin Versteeg
Museum Celebrates 20 Years
Last Friday (8 November) the museum celebrated our 20th anniversary in style - cocktails were served, and guests were entertained by Emma & Robin, who performed a selection of songs by Cole Porter and George Gershwin. There were speeches by Seonaid (the chair) thanking everyone for coming, and Dan (the manager) thanking our members & sponsors for supporting the museum over the years, for without their support, we would not be open.
A fantastic evening of entertainment was had by all - Tom from the Stathy was in attendance taking pictures for the paper, so check out the next issue for more coverage of our spectacular event! Surprise visit brings link to Canadian First Nations
Canadian visitors brought a flurry of excitement when they revealed their family heritage to Grantown Museum last Friday.  On coming to visit Scotland, they were considering a visit to Grantown because of their Grant ancestry and on checking the museum’s website, were convinced that the trip would be worthwhile. The Museum’s annual exhibition is entitled Canadian Cousins, and this mother and daughter could safely say that they have close family ties to an important story told in the show. They are directly related to Cuthbert Grant of Cromdale who left for Canada in the 18th Century and whose son would become leader of the Métis Nation, Cuthbert Grant Jnr. His story is described in the exhibition which finishes on October 31st. His great-great-great granddaughter (pictured right), and her daughter Nicole bought a ceremonial sash used by the Métis Peoples, a nation formed from the descendants of Canada’s Indigenous Peoples and early immigrants. The Métis Nation promoted their distinct identity in 1812, when Cuthbert Grant led a battle in the Pemmican War, flying the Métis flag. The sash was donated to the museum as a symbol of the connection between the people of Strathspey and the Métis.

Busy Weekend at the Museum

This past weekend (11-13 October 2019) was very busy, with a book launch on Friday and a live concert on Sunday. This meant we had to take the current exhibition (Canadian Cousins) down Friday afternoon, set up for the book launch, then put the exhibition up again afterwards, ready for visitors on Saturday. Then we had to do that all again on Sunday! But what a wonderful weekend we had - both events were very well attended - we were really packed Sunday night and had to search for every last chair in the building.
Frank Bardgett's book launch and talk on the Grants of Tulloch was riveting, and then on Sunday Hamish Napier and Adam Sutherland brought the house down with a foot stomping set. Lots of books and CD's were sold and everyone went home well entertained.

1 September 2019
The museum was on the square for Grantown's classic car show this year. There were a few showers, but the weather was not as bad as the day before, so it could have been worse. It's Scotland after all!
​Everyone admired the vintage cars (and some tractors as well), and wandered around the stalls. We sold lots of retro and vintage merchandise, and had fun with "Guess the Object" again - Dan had dug out a few more "treasures" from the archive.....there were some items that even we weren't sure what there purpose was, but we had lots of suggestions. Chatted with the members and recruited some new folks to join the museum. A good day was had by all and everyone enjoyed the final parade led by the pipe band.

The museum had a stand at the Nethy Games on 10 August - great fun was had by all, with a welcome respite in the weather, and no rain!
After the recent downpours, everyone was very concerned about the level of mud that was going to be encountered, but luck was with us and it was a lovely day. The sun even shone for a while.
Lots of Clan Grant merchandise was sold and lots of members stopped by for a wee chat with Seonaid and Suzi who were manning the stand.
We didn't even need all those extra socks we brought..... Open Gardens Day brought out many folks in the community to tour the 7 gardens on display - an excellent day was had by all, which included a lunch at Nethy Community Centre and a Strawberry Tea at the museum - funds were raised for the museum and Cairngorms Riding for the Disabled. Thanks to all involved, including the wonderful gardeners and all the volunteers who made this happen. To mark the opening of the new summer season, Grantown Museum recently hosted an event to unveil its latest acquisition - a 300 year old portrait by the chief’s of Grant favourite artist, Richard Waitt. But intriguingly, no-one can say with certainty who the gentleman in the portrait is. It was traditionally thought to be James Ogilvie, 1st Earl of Seafield. His grand-daughter married Sir Ludovick Grant and was mother to The Good Sir James (he who founded Grantown). However, it has been argued that the sitter bears a striking resemblance to other known portraits of Sir James Grant of Grant, the paternal grandfather to Grantown’s founder.
The purchase was made possible through help from the National Fund for Acquisitions, and the Art Fund; also, a gift in memory of George Rafferty a former Vice-president of the Museum.
​We are greatly indebted to these organisations and to the Rafferty family for their generosity.