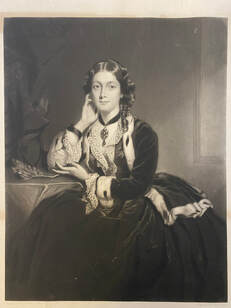 Lady Caroline Henrietta Ogilvy-Grant (nee:  Stuart)   Dowager Countess of Seafield
After the death of her son, Ian Charles, Caroline was left as heiress to the estates (whereas the titles went to her brother-in-law in New Zealand).
She took on the role with vigour despite her bereavement and became much loved amongst her tenants and towns people as a generous and unfailing benefactor.
Only fifteen months after his death, she opened the hospital which had been planned by Ian Charles ‘for the treatment and care of the sick, which has been of untold benefit to the Speyside district’ and which still stands today.
On May 1st 1886 she laid the memorial stone on the Seafield Memorial Church that she had designed by her private architect, Mr Alex Smith.
She continued her predecessor's good work with diligence, considering the circumstances and wants of all her tenants individually and on more than one occasion reducing their rents to enable them to make ends meet.
Back to the family