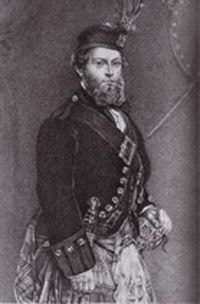 John Charles Ogilvy-Grant. 7th Earl of Seafield
The eldest son of Francis William Ogilvy-Grant, 6th Earl of Seafield, and Mary Ann Dunn. He succeeded his father as Earl of Seafield in 1853. From 1853 until 1858 he sat in the House of Lords as a Scottish Representative Peer. The latter year he was created Baron Strathspey, of Strathspey in the Counties of Inverness and Moray, in the Peerage of the United Kingdom.
In 1850, he married the Hon. Caroline Stuart, youngest daughter of Robert Walter, 11th Lord Blantyre. In 1858, he was created Baron Strathspey of Strathspey in the peerage of the United Kingdom of Great Britain. Lord Seafield was dedicated to the improvement of his estates and building roads. He was an avid breeder of highland cattle, and like his father, an enthusiastic planter of trees. Lord Seafield was a staunch Conservative and took his seat in the House of Lords. He was also an active office holder in the Church of Scotland. Lord Seafield died at Cullen House in 1881 and was entombed in the Seafield mausoleum at Duthil.
He was succeeded by his son, Ian Charles.Ogilvy-Grant . Ian died three years later, leaving the baronetcy to his Uncle James. James died aged 70, four years later in 1888.
The next Earl, James’ son Francis William (named after his grandfather) lived in New Zealand after his naval career leaving the estates in Strathspey under the superb stewardship of his aunt, the now Dowager Duchess Caroline (John Charles’ Widow).
Back to the family