The Clan Chief is The Rt. Hon Sir James Grant of Grant, The 6th Lord Strathspey, Baronet of Nova Scotia, 33rd Chief of Clan Grant. "Stand Fast Craig Elachie" is the slogan of the clan.

Some historical figures from Clan Grant 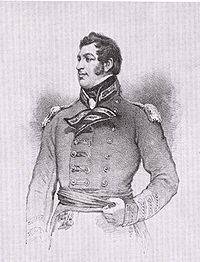 Francis William Ogilvy-Grant
6th Earl of Seafield. Fourth son of Sir James Grant, 8th Baronet, and Jane Duff. He achieved the rank of Colonel in the army. In 1802 he was elected to the House of Commons for Elgin Burghs, a seat he held until 1806, and then represented Inverness Burghs from 1806 to 1807, Elginshire from 1807 to 1832 and Elginshire and Nairnshire from 1832 to 1840. In 1840 he succeeded his elder brother as sixth Earl of Seafield, and sat in the House of Lords as a Scottish Representative Peer from 1841 until his death in 1853. Apart from his political career he also served as Lord Lieutenant of Inverness-shire from 1809 to 1853.
Lord Seafield was married twice. He married firstly Mary Anne Dunn, daughter of John Dunn, in 1811. They had five children. After his first wife's death in 1840 he married secondly Louisa Emma, daughter of Robert George Maunsell, in 1843. He died in July 1853, aged 75, and was buried at the mausoleum at Duthil Old Parish Church and Burial Ground, just outside the village of Duthil, Inverness-shire. He was succeeded in his titles by his son from his first marriage, John Charles Ogilvy-Grant.
He was educated in our local grammar school and was almost as highly regarded as his father, ‘ The Good Sir James’ - founder of the Town.
Back to the family